Can a magnet disrupt a ceiling fan?

Hi there, how are you doing. I live in an apartment. I have a guy living below me who has his ceiling fan running ALL the time, even when it's -12 outside. I find it annoying. I tried talking to the building management, but they won't do anything. If I got a magnet and put it on the floor above his fan, would it disrupt the motor?
Good question. Here is our answer... and other websites on the Internet also agree. 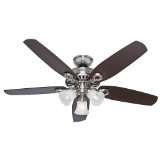 Answer: Unfortunately, no. This won't work. Not really a lot you can do in this case. One thing you can do is put down a heavy or somewhat thick area rug on the floor. This will drown out the sound of the ceiling fan.


The ceiling fan should not be that loud or troublesome. If you are hearing a wobbling, grinding or some other noise, this could indicate there is actually a problem with the fan. If this is the case, this you can report to the building management and they may go and fix the fan properly. But other then that, there isn't really a lot you can do in this case. Are you having some other problems with this tenant or this is the only one? Generally, this should not even be a problem. There are far worse problems you can have with someone who lives below or next to you, so consider yourself lucky. It's probably an old person!

Is there a way to disrupt a ceiling fan?

Well, why would you want to! Heck, we're just about ready to jump into a lecture here about keeping your ceiling fan in good working order. There isn't really a way to disrupt a fan - unless you knew what kind of fan it was. If you know the make and model of the ceiling fan, then you can actually disrupt its operation. Try buying a remote that matches the make and model of the remote. For instance, if the fan is a Hunter model 67 fan (we kind of made this model up), then you'd buy the remote that matches the fan.
If the owner of the fan has never changed the dip switch settings on the fan and remote (most people would not), then you're pretty much in business. You can stop the fan and start it from another room. This would likely work on someone in an apartment above, below or beside you. Depends on the thickness of the walls, but it'll likely work.
It may just annoy the person owning the fan until they decide to do something about it. It'll only work for so long until they figure it out, or try something to stop it from happening.