How do I replace a ceiling fan pullchain?

One of the most common repair issues with ceiling fans is replacing a broken pullchain. It is not inevitable that someone will pull too hard, someone will attempt to be tarzan, etc and the chain will pull out of it's socket. In most cases the chain can not be reattached, however it is inexpensive and relatively simple to replace the socket and chain assembly.

Some fans may use only two or three wires, some may have a pullchain with two layers and five or more wires. Regardless, make careful note of which wires attach where.

The replacements mentioned above are the most common examples . . . but as I said, there are other switches that may appear identical (for example three speed fan, four wires, but it's NOT the first switch I mentioned). In most cases I would first try the replacement mentioned above. These are the switches that your local hardware store should stock. If the fan does not work with the likely replacement, does not work on all speeds, spins too fast, too slow, etc . . . and you are sure you properly noted which wire connected where on the old pullchain and wired the replacement correctly . . . then it appears your fan is in the 25% that uses a non-standard switch. There are three ways to determine the correct replacement switch:


5. Ok, you've determined and obtained the correct replacement switch. Seeing as you made careful note of which wires connect to where on the old switch, reconnect the wires in the same manner to the replacement switch. If your old switch did not require the tips of the wires be soldered you may need to do so in order to properly attach them to the pullchain.

II. Some fans do not use the pullchain to control speeds, but instead have a dial or other control on the fan for speed selection. The pullchain is used to turn the fan off and on, and in some cases also to reverse the fan, select between the high speed and the various low speeds derived from the speed control, or also control the light. In these various examples:


III. If for whatever reason you do not know which wires connect to which locations on the pullchain, you may yet have some options. For starters, black is almost always L. Some other common color combinations:
For many four wire pullchains:


For many three wire pullchains: 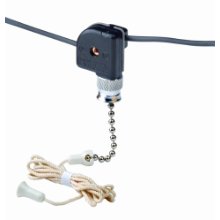 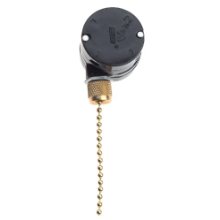 How do I replace a ceiling fan pullchain? Frequently Asked Questions (Faqs)